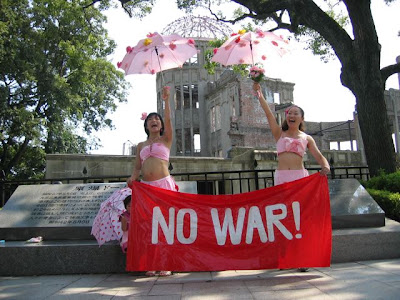 In conjunction with the Non-Proliferation of Nuclear Weapons (NPT) conference now taking place in New York City, grassroots Japanese anti-war art group Pink Action will hold a peace event in front of the United Nations Headquarters on May 7, 2010 from 11:00 AM to 4:00PM in collaboration with the Maruki Gallery for the Hiroshima Panels.

Tokyo-based painter and performance artist Rena Masuyama, who started Pink Action in 2003 following the launching of the Iraq War, will perform on Friday in front of the Hiroshima Panels—large-sized paintings that depict shocking images of the human suffering wrought by the atomic destruction of the city in 1945.

Also present at the event will be staff from the Maruki Gallery, as well as floral artist Hirokuni Ozawa and image scorer Michiko Motosugi. The group will distribute carnations to passersby, together with note cards bearing the following message:


"Toward a Nuclear-Free World”

In August, 1945, atomic bombs were dropped on Hiroshima and Nagasaki in Japan by the hands of the United States of America.

At this time, mothers and children could be seen running away from the flames; others later embraced their children who were stricken with cancer from the radioactivity.

"The Hiroshima Panels" are images which Mr. and Mrs. Iri and Toshi Maruki began painting after witnessing the horrifying damage of this nuclear weapon. Their poignant body of work was nominated for the Nobel Peace Prize.

In the United States, people seem to have little knowledge about the damage of the atomic bombs dropped on Hiroshima and Nagasaki. As a result of this lack of knowledge, damage from nuclear weapons continues to occur to this day.

For example, in addition to over 220,000 people being killed from the impact in Hiroshima and Nagasaki, more than 150,000 Iraqi people were killed in the recent Iraq war, in which the U.S. Army used depleted uranium ammunition. 4,394 American soldiers were also killed during this war, while others returned home after having been exposed to radiation from this depleted uranium.

Citizen-led inquiries are now being made in the United Kingdom, the Netherlands and Japan regarding the unjust launching of the Iraq War. It is now our sincere hope that the same thing will occur in the United States. There is no individual nor any country existing on earth that desires to see people suffering from nuclear weapons!

In dedication to all mothers who have given birth to us, we declare our hopes for creating a bright future without nukes. Our strong message is the following:

"Toward a Nuclear-Free World. No More War, No More Nuclear Weapons!" 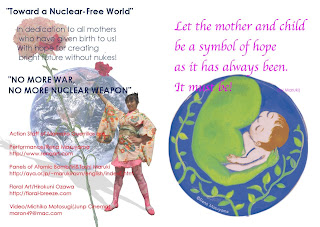 Japan's citizen-led inquiry into the Iraq War was spearheaded by a group of activists, aid workers and other professionals including freelance journalist Shiva Rei, who recently spoke at Peace Not War Japan's Spring Love event (and who is also Rena Masuyama's partner). The text of the inquiry reads as follows:


What was the Iraq war!?
(The Network to Create an Iraq War Inquiry, Japan)

In March 2003, former Prime Minister Junichiro Koizumi—ignoring a poll which showed opposition to be as high as 80%—made a commitment to support the United States-led military campaign against Iraq. In addition to this attack not having been authorized by the United Nations Security Council, the reason used to justify it—that Iraq possessed weapons of mass destruction—also proved to be wrong, which was later admitted by U.S. President George W. Bush.

In spite of such circumstances, warfare kept escalating, with deaths of both Iraqi citizens and multi-national troops continuing to increase. While the Japanese government dispatched its Self-Defense Forces (SDF) to Iraq to render “humanitarian support,” according to reports disclosed to the public by the Defense Ministry in October 2009, the main mission of the Japan’s Air SDF was revealed to have been the transportation of military personnel and goods of the multi-national forces, including those of the United States.

The Iraq War has unleashed the worst kind of humanitarian crisis. The World Health Organization estimated that 150,000 civilians were killed, and another estimate from Johns Hopkins University estimated the number to be several hundred thousand.

Even now, used depleted uranium bullets and cluster bombs continue to damage Iraqi communities. The public peace is not maintained; to the contrary, the situation continues to worsen. While more than ten people lose their lives every day in army attacks or terrorist bombings, one out of six Iraqis live in shelters in and out of Iraq. Most of them suffer from overwhelming poverty.

Whether or not Japan makes a commitment to address such humanitarian crises is the looming question of the Japanese state, which claims to be a peace oriented, democratic nation. The British government has already launched an independent inquiry to verify the administration’s policy-making process to join the U.S.-led Iraq invasion, as well as the legitimacy thereof. It is also important for us to verify the propriety of Japan’s having supported and joined the U.S. military action. This is critical for the following reasons: so that in the forthcoming years, our right as Japanese citizens to live in peace will be respected; we will never again take part in warfare; and we might settle the resentment of the Iraqi civilians who were killed during the war.

In order to achieve these aims, we recommend the following:

1. The Japanese government should set up an “independent verification committee” to make a thorough review of the following three matters: the then administration’s decision to support the U.S.-led Iraq War; the decision to dispatch the SDF to Iraq; and the involvement of the Japanese government in the reconstruction mission of Iraq. The committee should make careful investigations concerning the above mentioned subjects, disclose the findings, and decide which bodies—including individuals—will take both moral and legal responsibility.

2. The procedure and the final report of inquiry/verification should be disclosed to the maximum extent, and should be available to anyone so requesting.

3. On receiving the final report submitted by the independent verification committee, the Japanese government should make an official statement on the findings to be released on both local and global levels, and should render the necessary humanitarian aid and support to the victims of the war.


To date, Pink Action has held performances worldwide in places including China, Germany, Iraq, and Okinawa. More information about founder Rena Masuyama is available on her website, and her performance at a recent World Peace Now demonstration in Tokyo is profiled here. 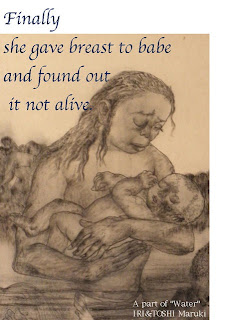 In addition, the documentary film PINK Jeanne'd Arc , which is presently screening in Japan, depicts Rena Masuyama’s life as an artist, peace activist and mother of two. It explores her exchange with local artists in Iraq, art performance at the Maruki Museum, and protest against the Rokkasho Nuclear Fuel Reprocessing Plant.

Masuyama asserts that while her flamboyant actions may appear to some as being radical, they all originate in her natural wishes for life—and in her fervent hope for all children everywhere to be able to live in peace.