Although President Obama campaigned on promises of "change," his foreign policy choices in Latin America, Africa, and the Asia-Pacific turned out to be more expansive versions of the Bush administration's neocon militarization goals.

Japanese people were among those worldwide who cheered Obama's victory, believing his message of hope. No one in Okinawa is cheering Obama or Hatoyama (who campaigned on the same promise of "change') anymore. Although these heads-of-state are set on the 2006 Bush-Koizumi deal—they still need local approval.

It's astonishing that these highly militarized, deeply indebted nations would pursue even more military spending.

The Japanese sovereign debt (ratio of debt to GNP) is worse than that of the U.S. Analysts compare it to a "ticking time bomb."

Can the U.S. afford to carry out and maintain the Bush 2020 "Full Spectrum Dominance" plan for ever-expanding U.S. militarization throughout the entire world? Can Japan afford to continue its massive subsidies for the U.S. war in Afghanistan and U.S. plans for military expansion in the Asia-Pacific? Is any of this escalation necessary in the Asia-Pacific?

In this week's China-US Strategic and Economic Dialogues, China and the US committed to strengthening and stabilizing their partnership:


In fact, our two sides sitting together, having in-depth communications, candid exchanges, and rational discussions on our common interests and differences existing between us, this in itself is the most significant outcome of this round.

With this latest development of deepening economic integration between China and the U.S. (and Japan and the rest of the world), it seems highly unlikely that Beijing will launch a nuclear attack or land invasion upon Japan, its major trading partner, and fellow U.S. ally.

That leaves North Korea as the only possible arch-enemy for Japan and other U.S. allies in the Asia-Pacific.

With formidable military presence extant in the Asia-Pacific (the U.S. already has 90 bases throughout Japan and Okinawa), and Japan has a powerful, up-to-date Self Defense Force. South Korea has a formidable military. Tthe idea that another U.S. base in Okinawa is necessary to stave off an unlikely North Korean missile attack does not make a lot of sense. Moreover, the real purpose of U.S. bases in Okinawa is for training Marines and other US troops in simulated battlefields before they set out for Iraq and Afghanistan (and before that, Vietnam).

For some perspective on the North Korean threat, it's wise to compare military spending and capability. From Bill Quigley's "Number One in War:"


...the USA is number one in war.  This coming year the US will spend 708 billion dollars on war and another $125 billion for Veterans Affairs – over $830 billion.  In a distant second place is China which spent about $84 billion on its military in 2008...

The US has 5 percent of the world’s population but accounts for more than 40% of the military spending for the whole world.

North Korea (1.1 million) does have the world's most militarized population, but the Chinese (2.1 million); the U.S. (1.5 million); and the Indian military forces (1.3 million) are larger. For more military facts, see the Guardian's "Information is beautiful: war games." 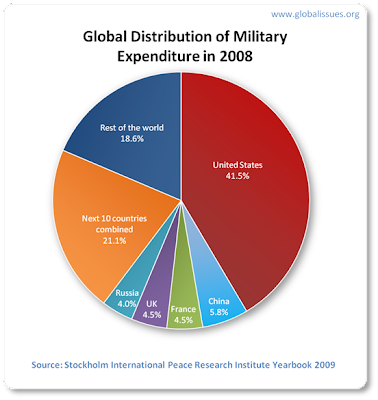 Posted by TenThousandThings at 12:00 AM
Email ThisBlogThis!Share to TwitterShare to FacebookShare to Pinterest
Labels: Japan, military spending, Okinawa, poverty