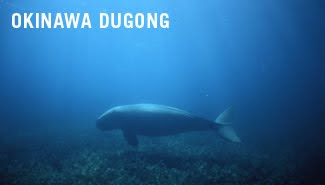 On Wednesday, the serendipitous sighting of a dugong off the Nago coast near Henoko in central Okinawa created a cosmic prelude to the orchestra of Okinawan activities accompanying the Peace March this weekend.

Today marks the 38th anniversary of the reversion of Okinawa to Japan. Okinawans expected that the reversion would result in the closure of U.S. military bases on their island. After this did not happen, Okinawans protested and have demonstrated for peace on the anniversary ever since.

Yesterday members of the Japan Environmental Lawyers Federation hand-delivered a letter to Japanese Prime Minister Yukio Hatoyama demanding the closure of the Futenma military base and protesting its relocation.

This same letter was delivered to President Obama last week and is signed by more than 500 environmental, peace, justice, and religious organizations — demanding the immediate closure of the base and the cancellation of plans to relocate it to Henoko Bay, Okinawa. On May 16, 30,000 Okinawans will create a human chain around the Futenma base’s 11.5-kilometer circumference in a remarkable demonstration against the base relocation.

On April 25, in a stunning display of solidarity and perseverance, more than 90,000 citizens of Okinawa, Japan protested the relocation of a U.S. military base on their tiny island.

Concurrently, in Washington, D.C., members of the Network for Okinawa — of which the Center for Biological Diversity is a member — rallied in front of the Japanese Embassy in support of the Okinawa protest. Meanwhile, the network and the Tokyo-based Japan-U.S. Citizens for Okinawa Network sponsored a full-page ad in The Washington Postaimed at reaching a larger U.S. audience.

Despite these highly visible demonstrations—on behalf of democracy and environmental protection—against the relocation, and a campaign promise to remove the base from Okinawa, Prime Minister Hatoyama, under heavy U.S. pressure, reiterated that the base will be relocated to Henoko Bay, Okinawa. This beautiful coastal area is a habitat for more than 1,000 species of fish; almost 400 types of coral; three species of turtle; and the beloved Okinawa dugong, a rare relative of the manatee.

As Center Conservation Director Peter Galvin explains: “Destroying the environmental and social well-being of an area, even in the name of ‘national or global security,’ is itself like actively waging warfare against nature and human communities. We implore the U.S. and Japanese governments to cancel any plans to construct or expand military airbases in the last remaining Okinawa dugong habitat.”

Learn more about the Center’s campaign to close Futenma.

The Center for Biological Diversity is a national, nonprofit conservation organization with more than 255,000 members and online activists dedicated to the protection of endangered species and wild places.
Posted by TenThousandThings at 1:28 AM
Email ThisBlogThis!Share to TwitterShare to FacebookShare to Pinterest
Labels: biodiversity, ecosystems, oceans, Okinawa