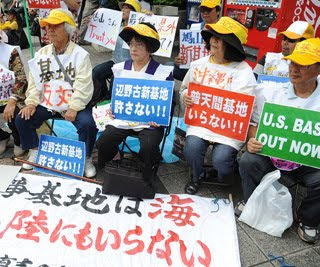 Okinawa was returned to Japan in 1972, but the Okinawan people's hopes for peace were not fulfilled, and Okinawa was used to strengthen US military power. So, this monument is not an expression of joy nor victory.


-- Inscription on a monument at Kunigami Village, Cape Hedo, in northern Okinawa Thousands of people rallied for peace, democracy and protection of the dugong and other species threatened by proposed U.S. military base construction in Okinawa this morning of the 38th anniversary of its reversion to Japan from US occupation, as the island seeks to cut its still heavy US military presence.

Around 2,500 people marched in several groups around the subtropical island, chanting: "Let's create a peaceful Okinawa without military bases."

The U.S. reverted Okinawa to Japan on May 15, 1972, following 27 years of official US occupation. The announcement a year earlier resulted in the Okinawan expectation that the U.S. would remove its military bases, but the U.S. and Japan refused to remove them, citing the Japan-US security alliance.

Because of U.S. pressure, Prime Minister Yukio Hatoyama backtracked on an election pledge made last year to move the noisy and dangerous Futenma Air Base entirely off the island. He has propsed the expansion of this base and its transformation into an even more noisy and dangerous heliport for Osprey aircraft, known for malfunctioning and deadly crahes. The proposed plan would damage a coral reef that is the habitat of the federally protected and critically endangered dugong, a cousin of the manatee. Villagers in Henoko, a fishing village adjacent to the expansion site, have been protesting since the announcement of the U.S.-Japan plan in 1996.

On Sunday, demonstrators will form 13 kilometer- ong (eight miles) human chain around the airbase to protest against the relocation plan.

Half the 47,000 US troops in Japan are stationed in Okinawa. Okinawans have sought to remove the bases since the end of the Second World War, when the U.S. constructed them in anticipation of an invasion of mainland Japan. The bases create noise, pollution, accidents and crimes.

This year, the mayors, prefectural leaders, and people of Okinawa—in democratic unanimity—have demonstrated repeatedly for the closure of Futenma Air Base and in opposition to any new military construction in Okinawa. But the U.S. government has thus far refused to acknowledge and respect democratic process in Okinawa and a U.S. federal judicial ruling on behalf of protection of the dugong habitat.
Posted by TenThousandThings at 1:41 PM
Email ThisBlogThis!Share to TwitterShare to FacebookShare to Pinterest
Labels: citizen action, democracy, Human rights, Okinawa, peace