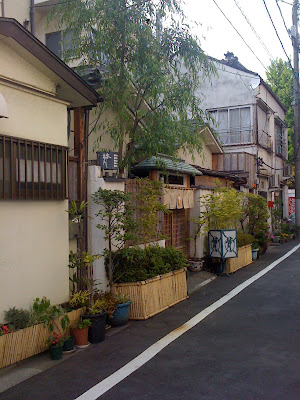 Periods of war and political turmoil in ancient and medieval China and Japan were also times of deep cultural development, including cuisine. Not only as a means of sustenance or expression, but also as a form of personal renewal.

Great inspiration may be found in small, everyday examples of positive human connection.


Fucha ryouri is a distinctive tradition within shojin ryouri, the vegetarian cuisine of Zen Buddhist monks in China and Japan. About 300 years ago, it was introduced to Japan by cooks who came from China with the monk Ingen, the founder of the Chinese style temple Mapukuji, at Uji near Kyoto. This was the first temple of the Obakushu Zen sect in Japan, and since its establishment, the authentic tradition of Fucha has been handed down by devotees of the sect.

The two characters used to write “fucha” mean “drinking tea together with all people”, but the word is also used to mean a meal eaten in Chinese style (each dish is served from a single large bowl) which begins and ends with tea, aiming to create friendship and peace among those eating together.

At Bon, we have tried to develop a style of Fucha ryouri which, while suggesting aspects of Zen, the basis of this tradition also provides for the tastes of the general public. In particular, we aim to provide the fine dishes from the best obtainable seasonal ingredients.

The name of our restaurant, Bon, means “Buddhist believer” and was chosen as a sign of our respect for the origins of Fucha as a way of Buddhist practice.

Entering the restaurant and absorbing its deep, still sense of calm, I found myself strongly wishing that the military powers of subsequent centuries—the present-day United States in particular—would draw lessons from its peaceful simplicity and example for positive cultural exchange. 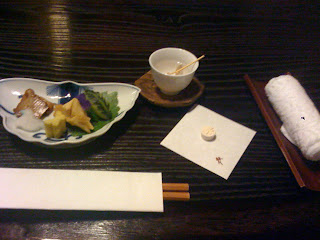 First course, served with a tea of orchid flowers in plum vinegar (left) 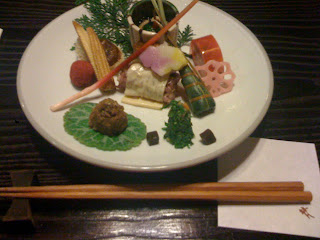 Shun kan, described by the menu as a decorative presentation of cooked seasonal vegetables (above)

Lovely descriptions of additional aspects of fucha’s origins may be read here via Akasa Media, and an earlier Ten Thousand Things post by Jean Downey. The New York Times also ran a review of Bon almost 25 years ago, available in its archives here. 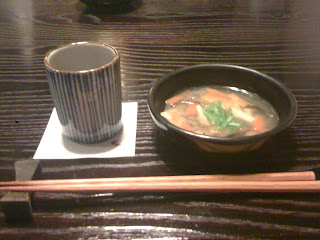 Un pen, a rich 17th century Chinese soup traditionally made with leftovers and eaten in a spirit of gratitude for the vegetable bounty (left) 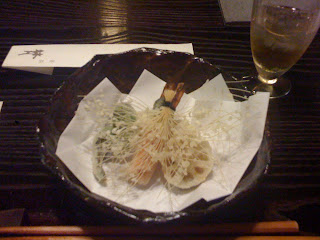 Yu ji, mixed tempura in a classical basket, and plum wine (above) 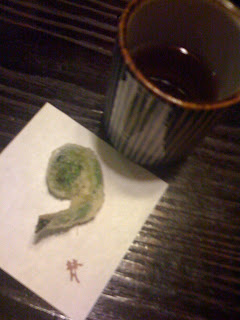 Is it me, or does this piece of tempura resemble the number 9? Perhaps a deliberate statement of peace for Japan’s Constitutional Article 9? 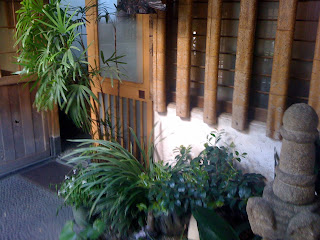