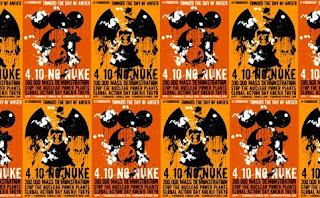 Via  Time Out Tokyo:


Japanese anti-nuclear demos aren't unusual, but they've never been very well attended. Until now, that is. A protest march in Ginza on March 27, campaigning against nuclear power, saw around 1,200 people turn out to express their displeasure - hardly the vast swathes you'd expect in other world capitals, but around 40 times more than the monthly gathering usually attracts (a hardcore gang of 30). Similarly, a March 20 protest in Shibuya attracted 1,000 disgruntled protesters.

The biggest yet, or so the organisers hope, will be the Hangenbatsu Choukyodai Demo (literally, the 'Anti-Nuclear Power Plants Super Huge Demo'), taking place in Koenji Chuo Park on April 10. The event looks like being part protest, part rock concert, part charity event. The line-up features DJs Axeman and Yahman, MCs Rankin Taxi and Rumi, and live bands including Jintara-Mvta, a raucous big band that includes members of Cicala-Mvta, Soul Flower Union and others. The event will kick off at 2pm, and the concert/demo will run between 3pm and 5pm, at which point the audience is encouraged to move to the Koenji Kitaguchi Hiroba area to donate money.

The cash will go partly towards supporting the people of Koenji's sister city Minami Souma, a town located within the 30km Fukushima evacuation zone, and partly to the Sendai Birdland, a charity collective made up of musicians who are actively involved in getting supplies to Tohoku.

See the website of the April 10th 'Stop Nuclear Power Plants! Global Action Day' for more information about the Koenji event, as well as information in various languages regarding solidarity demonstrations taking place on the same day in locales around the world, including Canada, France, Germany, Korea, Mexico, the United Kingdom and the United States.
Posted by TenThousandThings at 7:00 PM
Email ThisBlogThis!Share to TwitterShare to FacebookShare to Pinterest
Labels: 3/11, citizen action, creativity, Japan, music, Nuclear-Free, Tokyo