Is another Pacific War inevitable? John Feffer says "No" & brings clarity & hope to the issue of changing excessive military spending in the A-P 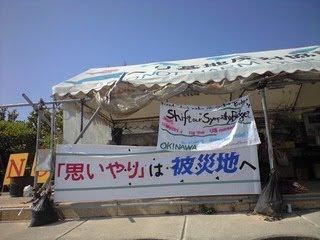 Some pundits tell us the U.S. is going to war with a "rising China" in the near future. That's why they want to spend more on missile defense surrounding China, military expansion in South Korea and Guam, and another U.S. military mega-base on Okinawa (although 30 U.S. bases and facilities already exist on 20% of the island).

But is another Pacific War inevitable?

John Feffer says "No" and brings clarity and hope to a discussion on excessive global military spending and how we can stop the march toward more wars in this great National Public Radio (NPR) interview, with good audience Q&A. (Head's up: a fund-raising drive interrupts the interview; just use the button to scroll through those parts).

Feffer, an editor at Foreign Policy in Focus and a fellow at the Institute for Policy Studies (IPS), a D.C.-based think tank that focuses on social justice, peace, and environmental issues, explains how the Global Day of Action on Military Spending came into being. Last summer, he and others at IPS got together with people from around the world concerned about excessive global military spending that has doubled over the last decade. Without attention, they didn't see any prospect of change, even with the severe economic recession. People facing crises all over the world like global warming don't have the money to deal with these challenges because of the money wasted on military spending. So they decided to have a global day focused on military spending.

IPS' major partner is the International Peace Bureau (IPB), located in Geneva, first winner of the Nobel Peace Prize, and about one hundred other organizations are working with GDAMS; Physicians for Social Responsibility, Pax Christi, Fellowship of Reconciliation, and many nationally based organizations in the 35 countries involved.

They chose April 11 because this is the date the Stockholm International Peace Institute releases its figures for 2010. Their goal: to make sure the photographs in the media accompanying these figures were of people rallying for a reduction in global military spending rather than photographs of fighter jets.

Some notes from the interview...

Russia's economy has turned around from its collapse at the end of the Cold War, largely because of sales from oil and natural gas; it has returned to high levels of military spending that brought it to economic collapse in the 1990's. India and Saudi Arabia are also in the Top Ten.

There have been a number of scandals involved in Pentagon contracts. There was a student from Florida buying cheap ammunition from China and reselling it to the Pentagon; he was indicted. The Pentagon can't track all the number it spends. Most goes to the major contractors: Boeing, Lockheed, Martin. They get U.S. assistance in selling military equipment overseas. There are private contractors who do much of the same work our soldiers used to do. Money goes to healthcare, benefits. This totals around $650 billion in the base budget alone.

There's only been one time when there's been a reduction in military spending — after the Cold War. That money went to deficit reduction.

Reducing military spending involves an interwoven set of issues. A jobs conundrum accompanies the military spending issue. Factories for components of weapons systems have been distributed carefully across the United States to make it difficult to cut spending. Politicians don't want to close weapons factories and thereby cut jobs in their states.

The question is how to repurpose those manufacturing facilities. If you look at a comparison, a dollar spent on military industries versus a dollar spent on education, healthcare, infrastructure repair, then you find that the latter produces more jobs than the military industry. There was a lively debate on repurposing military factories during the stimulus spending. Unfortunately that was a one-time amount of money; a lot of it hasn't passed through the pipeline, and it hasn't resulted in any structural changes yet.

Have we gotten past they days of $100 bullets yet? There's still enormous waste that we see in cost-overruns. Manufacturers typically low-ball to get contracts and then bill in cost-overruns.

This is a global problem because the military arms market and trade is global. We have to do this globally, restraining the arms trade as we reduce arms spending. So GDAMS is global: a women's demonstration in Seoul, village protests in Kerala, demonstration in front of the White House. Part of this is to build a movement. Part of this is to discuss what works at the local, regional, national, and global levels. We are in the process of identifying effective political tools and developing alliances.

GDAMS is not about eliminating, but, instead, limiting military spending: a problem since Dwight Eisenhower's famous speech on the military-industrial-congressional complex. There are ways to reduce military spending that can make us safer. One way is to cut back on military exports to countries that end up using those weapons against us.

The accident-prone V-22 Osprey is an example of a weapons that has had a lot of cost overruns and is an unnecessary addition. We have a plan to expand the U.S. Navy at a time when this is simply fiscally irresponsible. We have plenty of ships. We don't know what to do with all of our ships. Missile defense is problematic for a number of issues. One is technical: does it work? Another is that it encourages a lot of other countries to build more weapons simply to address U.S. & allied missile defense.

First of all, we have to remind ourselves that military spending hasn't always been this way. The U.S. economy has only been militarized for the past 40 to 45 years. That's not a long time looking at history.

We can reverse what we created. We can roll it back to what the U.S. had before the Cold War. In the U.S., political campaign finance reform is a necessary step to restrain the influence lobbying has on military spending. We can prevent the collapse of our economy overburdened by military spending and build up viable manufacturing.

Citizens were able to stop the war in Vietnam. We were able to influence the U.S. polices in Iraq and Afghanistan by drawing down those wars. We have been able to change things in this country much more powerful than the military-industrial complex.

Other movements have faced much more challenge. Racism in the U.S. was much more powerful, yet the Civil Rights Movement had tremendous impact. We have this capability.

We can take inspiration from other countries that were able to affect U.S. military bases, whether in Puerto Rico, Latin American, in the Philippines, and other places in which our 1,000-based base empire.