Over three thousand march in Osaka on April 16th- No more Nuclear!

Anti-nuclear chants rang through the streets of Osaka, as over 3000 demonstrators filled the streets in solidarity against the continued use of nuclear power by Japan in the face of the unfolding nuclear disaster in Fukushima. Inspired by the 17,500 people-strong demonstration in Tokyo on April 10th, people young and old, walking on two feet or in wheel chairs, school teachers, business people, politicians, and celebrities gathered their creative energy together to raise their voices on behalf of those that can not. Some demonstrators, fearful of losing their jobs for participating in the demonstration, covered themselves with masks and hats so as not to be identified by their respective companies as they marched in the three-hour demonstration. 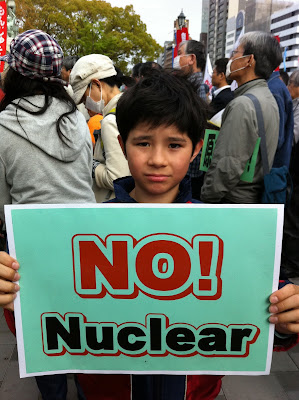 This young man led protesters in the group I walked with. 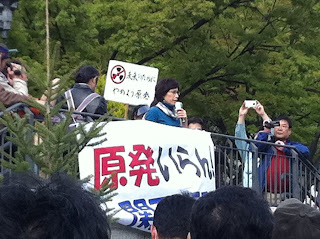 The demonstration was commenced with speeches from anti-nuclear movement leaders from the following 8 organizations:

Aileen Mioko Smith of Green Action spoke of her visit to Fukushima prior to the disaster. She could see the fear in people's eyes as they discussed the potential for disaster at Fukushima.

A Taiwanese man described how the nuclear crisis in Japan is providing momentum for the anti-nuclear movement in Taiwan, where there stands a nuclear plant constructed by Toshiba. An Anti-nuclear Power Network of Nara member shared her frustration with the city of Nara. Her attempts to convince politicians to create a plan to move away from nuclear power fell on deaf ears.

Some estimate 50% of energy in Kansai originates from nuclear reactors. We have yet to see if Japan, the third largest producer of nuclear energy in the world, will reverse it's goal to derive 50% of its domestic energy production from nuclear plants.

While politicians, including Tokyo governor Shintaro Ishihara, continue to make statements in favor of the use of nuclear power in Japan, others, such as newly elected Kanagawa governor Yuji Kuroiwa, are promoting a shift to renewable energy. Drawing upon the experience of Kamakura, where the Great Buddha 800 meters from the shore was swept away by a tsunami 1100 years ago, Kuroiwa is criticizing leaders who propose that building higher walls along the shores will protect Japan from tsunamis, and instead is proposing an end to nuclear power and investment in the solar banks.

For some people, including popular comedians who wish to remain unidentified, it was their first time to participate in any public demonstration. A 32-year old school teacher, hidden behind a mask, explained his reasons for joining the demonstration. "I wanted to show my solidarity with the people who want to see a future with no nuclear power. Nuclear power has the potential to destroy the world, it can kill the earth. We should invest money in alternative energy creation. I will not stop raising my voice." It is time to listen to the voices of the people and end Japan's dependence on nuclear power. 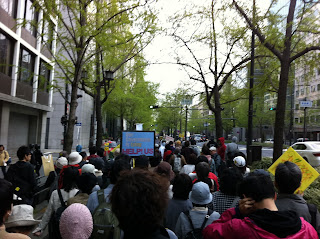 Over 3000 people march in Osaka


Show your support by adding your name to the petition to close down the Hamaoka Nuclear Power plant.

I oppose nuclear power on April 16, joined the march on Midousuzi.
Joined together with a friend, we walked to playing the instrument.
(Guitar friend. sax I)

Children, even mothers, students, some teachers、workers・・・
Day labor unions participated.
The students had a protest placard in his own written words. "I do not
want exposure to radiation. I want to love. Now!"

With various messages, walked more than 3,000 citizens.
Change the world, I felt the power of the people.

Thank you Yosuke for your beautiful comment. I truly believe that if we continue to come together peacefully, our message will resonate throughout the world, and change will come. The voices of the people of Fukushima will be heard, and the voices of Japan, the voices of people around the world, with their hopes for a better tomorrow will bring change. I hope to see you next time!