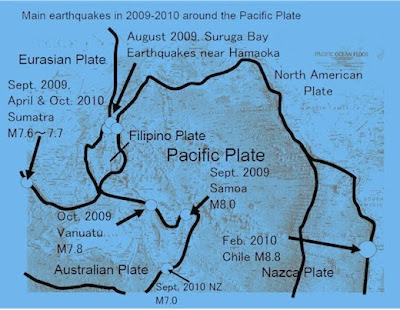 On the Danger of a Killer Earthquake in the Japanese Archipelago: The Nuclear Disaster That Could Destroy Japan ... and the World
By HIROSE TAKASHI
Translated by Doug Lummis

The nuclear power plants in Japan are ageing rapidly; like cyborgs, they are barely kept in operation by a continuous replacement of parts.  And now that Japan has entered a period of earthquake activity and a major accident could happen at any time, the people live in constant state of anxiety...

Seismologists and geologists agree that, after some fifty years of seismic inactivity, with the 1995 Hanshin-Awaji Earthquake (Southern Hyogo Prefecture Earthquake), the country has entered a period of seismic activity.  In 2004, the Chuetsu Earthquake hit Niigata Prefecture, doing damage to the village of Yamakoshi.  Three years later, in 2007, the Chuetsu Offshore Earthquake severely damaged the nuclear reactors at Kashiwazaki-Kariwa.  In 2008, there was an earthquake in Iwate and Miyagi Prefectures, causing a whole mountain to disappear completely.  Then in 2009 the Hamaoka nuclear plant was put in a state of emergency by the Suruga Bay Earthquake.  And now, in 2011, we have the 3/11 earthquake offshore from the northeast coast.  But the period of seismic activity is expected to continue for decades. From the perspective of seismology, a space of 10 or 15 years is but a moment in time.

Because the Pacific Plate, the largest of the plates that envelop the earth, is in motion, I had predicted that there would be major earthquakes all over the world.

And as I had feared, after the Suruga Bay Earthquake of August 2009 came as a triple shock, it was followed in September and October by earthquakes off Samoa, Sumatra, and Vanuatu, of magnitudes between 7.6 and 8.2. That means three to eleven times the force of the Southern Hyogo Prefecture Earthquake.

 All of these quakes occurred around the Pacific Plate as the center, and each was located at the boundary of either that plate or a plate under its influence.  Then in the following year, 2010, in January there came the Haiti Earthquake, at the boundary of the Caribbean Plate, pushed by the Pacific and Coco Plates, then in February the huge 8.8 magnitude earthquake offshore from Chile.  I was praying that this world scale series of earthquakes would come to an end, but the movement of the Pacific Plate shows no sign of stopping, and led in 2011 to the 3/11 Earthquake in northeastern Japan and the subsequent meltdown at the Fukushima

There are large seismic faults, capable of producing earthquakes at the 7 or 8 magnitude level, near each of Japan’s nuclear plants, including the reprocessing plant at Rokkasho. It is hard to believe that there is any nuclear plant that would not be damaged by a magnitude 8 earthquake...

The Rokkasho Reprocessing Plant is where expended nuclear fuel from all of Japan’s nuclear power plants is collected, and then reprocessed so as to separate out the plutonium, the uranium, and the remaining highly radioactive liquid waste.  In short, it is the most dangerous factory in the world....

On April 7, just one month after the 3/11 earthquake in northeastern Japan, there was a large aftershock.  At the Rokkasho Reprocessing Plant the electricity was shut off.  The pool containing nuclear fuel and the radioactive liquid waste were (barely) cooled down by the emergency generators, meaning that Japan was brought to the brink of destruction.  But the Japanese media, as usual, paid this almost no notice.

The Hamaoka Nuclear Plant is located at Shizuoka City, on Suruga Bay.  Despite predictions of a magnitude 8 earthquake on Suruga Bay, it has continued in operation.  If you look at the illustration showing the configuration of the plates beneath the Pacific Ocean, you will see that there is a point at which the Philippine Sea Plate, the huge Pacific Plate, the North American Plate, and the Eurasian Plate all meet; directly over that point is the Japanese Archipelago.  And the very center of the area where these four plates press together is Shizuoka...

Large scale earthquakes in the eastern and southern seas have occurred regularly at intervals of between 100 and 250 years.  Today in 2011, 157 years have passed since the Great Ansei Earthquake of 1854, so we are in a period when the next big one could come at any time.  And the predicted center of this expected major earthquake is – though this is hard to believe – exactly under the location of the Hamaoka Nuclear Plant.  And sonar readings at the site indicate that from thirty years back the Eurasian plate has been bending, which means that it is in a condition where it can be expected eventually to spring back.

Hirose Takashi has written a whole shelf full of books, mostly on the nuclear power industry and the military-industrial complex.  Probably his best known book is Nuclear Power Plants for Tokyo in which he took the logic of the nuke promoters to its logical conclusion: if you are so sure that they're safe, why not build them in the center of the city, instead of hundreds of miles away where you lose half the electricity in the wires?

Douglas Lummis is a political scientist living in Okinawa and the author of Radical Democracy. Lummis can be reached at ideaspeddler@gmail.com

This is enlightening. I was pleasantly surprised to see Dr. Hirose on NHK the other night. I think I may have caught a rare moment in NHK history but hope it’s the beginning of a policy shift at the network and that we see a wider spectrum of views from now on. BTW I think your link to Counterpunch may be broken.

Thanks for the head's up on his NHK appearance and link!