"We are not powerless": Shizuoka Residents Voice Fears, Hopes at “Nanohana Parade Hamaoka” 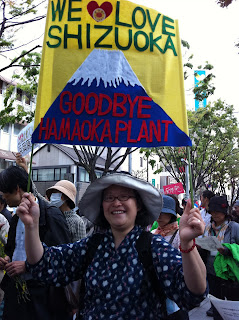 People of all ages gathered in Shizuoka City this past Sunday, April 24th in a lively gathering to call for an immediate halt to the Hamaoka nuclear plant, as well as to begin forging alliances for creating new alternative energies. Sitting atop the juncture of two tectonic plates within the prefecture on a fault line that is now overdue for a major earthquake, residents fear that if the plant is not stopped now, another Fukushima-like tragedy could occur.

Around 800 people attended the event, making it the largest ever such gathering for Shizuoka prefecture. In addition to a parade calling for the plant to be shut down, attendees also assembled in Aoba Park to the backdrop of lively music to share information and listen to speakers calling for an end to Japan’s reliance on nuclear power. Many also displayed creative signs and artwork voicing their fears for another accident—as well as their hopes for a future of clean energy.

The name of the parade comes from the nanohana (field mustard) plant, which many say can help mitigate the negative effects of radiation. 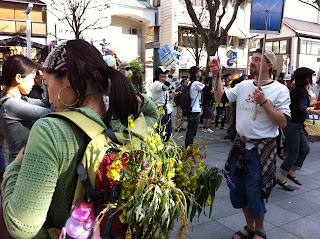 Bouquet of field greens including nanohana

The situation at the damaged Fukushima nuclear power plants remains critical, and there has been enormous suffering and anxiety caused as a result of the accident on many levels. This has made us realize that the Hamaoka nuclear power plants are still operating in our Shizuoka prefecture where we live.

Concerned about this, some of us rang Chubu Electric Power Company and checked their website. We found out that the electricity generated from the Hamaoka plant is only 14% of the total supply for the area, which means it could be possible to stop the Hamaoka plant. (Hamaoka plant was built on fault line and in the Tokai area where M8 earthquake has been expected to happen with a probability of 87% within next 30 years.)

We are raising our voices to ask: ‘Why is the Hamaoka plant still operating?’ We need to say our message loudly; otherwise it will not be heard and no change will come. We have organized this parade to show our deep concern at the continued operation of the Hamaoka plant. As we raise our voices, we are also questioning ourselves as to why are we not cutting down on our use of electricity. ‘Why are we not installing solar panels on our roofs', for example? We have realized that it is important to reflect on our daily lives to start making changes and do what we can to help.

We are hoping to set up a space for all residents to discuss new energy sources and about lifestyles which are green and sustainable as individuals, and also to look at organizing a citizen’s bank in order to design new natural energy plans from a grass-roots level.

After the earthquake in Northern Japan on 11 March, many of us were motivated to act. We believe that it is important to raise our voices outside, look into our own actions inside and discuss both approaches together. We feel we need to express this externally, and put this out to society as well as personally reflecting on our own lives.

The field mustard flower is believed to have the highest capacity to absorb Cecium 137 and Strontium 90 in soil. Field mustard needs calium and calcium to grow, and they are similar in nature to cecium and strontium. Thus, they can absorb radioactivity in soil. We have not experimented with this ourselves to prove it scientifically. However, we decided to use “Nanohana” as a symbol of hope and solutions in thinking about the accidents at the Fukushima plant, and our Hamaoka plant in Shizuoka prefecture.

We have chosen to hold a parade so that we can encourage both children and adults to take part. We hope that every small step which all of us will make on this parade can change our world. We are not powerless; we all have some personal power. We dream and believe we can create a new society by gathering some small power from everybody. Thank you very much for your attention and support.

Yukiko Hosomi, a native of Shizuoka City who has spent the last decade living in the United Kingdom, happened to be home visiting this past weekend, and attended the event in order to voice her concerns. “International news sources have called the Hamaoka plant the most dangerous nuclear power facility in the world, and so it is unbelievable to me that so many Japanese citizens—even ones in Shizuoka—seem to be quiet about it," commented Hosomi, who is pictured in the photo at the top of this post carrying her own handmade sign. "What frustrates me particularly is that many people do not realise that their complacency is actually supporting the continuation of the status quo. A new wave of demonstrations seems to be emerging, however, and so I truly hope that this event represents a new beginning whereby Japan will say a strong 'no' to nuclear power.”

Toby Siguenza, a teacher from the United States living in Shizuoka prefecture, agreed with Hosomi's optimism. "I saw everyone from octogenarians using walkers with protest signs strapped onto their backs to a baby wearing a home-made anti-radiation T-shirt—hardly people whom I would have imagined as 'protesters'", she commented. "More and more people are speaking out, and it is so inspiring to know that this issue has gone from faction to movement in a mere month."

One of the final speakers at the event emphasized to the crowd:“We have learned through the recent crisis that we cannot believe what the mainstream media tells us—so it is critical that we continue to share information amongst ourselves. Our struggle is not finished today when we disperse, however. Since the Hamaoka plant is still operating, it is just the start." 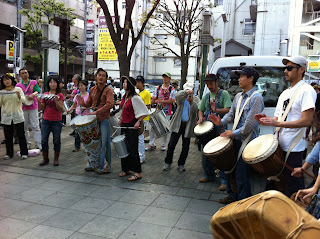 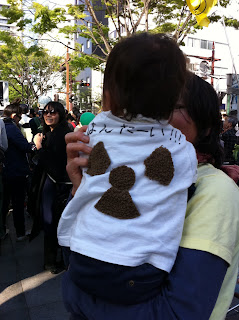 Japan’s Mainichi Shimbun newspaper included this recent article calling for Hamaoka to be shut down, and the video below from Al Jazeera probes the dangers existing at the facility.

The next gathering in Shizuoka is scheduled for June 11th, exactly three months after the earthquake, tsunami and nuclear disaster occurred, with solidarity demonstrations occurring in other cities worldwide. Watch this site for further information.

If you have not yet signed the international petition spearheaded by local residents to stop the plant’s operation, please do so and spread the word! If you are on Facebook, please also click “like” on the Stop Hamaoka Nuclear Power Plant in earthquake zone in Japan page in order to bring more attention to this critical issue. Many thanks!