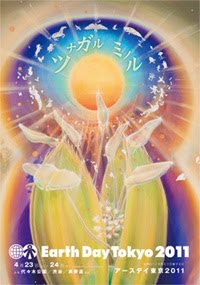 
Plans for this year's Earth Day festivities in Tokyo, which organizers predict will attract some 140,000 people, remain fluid in light of the disaster, but in addition to fund-raising activities for the victims of the earthquake/tsunami, one of the themes of this year's festival is saving electricity, an issue that has become much more immediate with the loss of the Fukushima nuclear reactors and the probability of another hot and muggy summer in the city. Electricity for the entire festival this year, including the power to drive public address systems for concerts and lectures, will be generated using recycled cooking oil, or so-called biodiesel fuel. There will even be a car on display that was designed to run on hemp oil.

More than 400 nonprofit organizations and nongovernment organizations will be on hand manning booths, distributing literature and selling wares. The 27 restaurants participating in the Earth Day Kitchen will serve dishes containing ingredients that are locally grown, organic and free of genetically modified elements. The president of Earth Day Tokyo since its beginnings, author, naturalist and Japan Times contributor C.W. Nicol, will honor 2011 as the International Year of Forests by presiding over the Earth Day Forest...Patrons are encouraged to bring their own dishware to cut down on waste, and those who do will receive a discount on all prepared food. The nonprofit recycling group A Seed Japan will provide utensils to those who come empty-handed, but you pay for it...

There will also be workshops in Japanese paper-making and various exhibitions, including one by Japan's only photojournalism magazine, Days Japan, featuring photographs related to issues having to do with the environment and poverty.

At least four nonprofit food resellers will be in the park selling fresh organic produce grown on farms in the Kanto region, some even within the Tokyo city limits. In many cases the farmers who actually grew the fruits and vegetables on offer will be counting the change. Other outlets for consumables include a Himalaya Bazaar featuring handmade clothing and accessories, and a Fair Trade Village occupied by various foundations dedicated to helping small producers in foreign countries get real value for their goods.