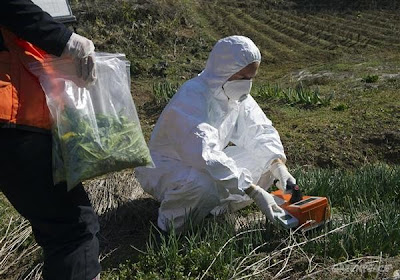 
Our radiation monitoring teams have discovered high levels of contamination in crops grown on the outskirts of Minamisoma city in Japan. The data was collected from the gardens of Minamisoma city residents, and registered well over the official limits for spinach and other vegetables. This is bad news amid already serious concerns over the health risks to residents and a lack of official information from Japanese government.

“In several Minamisoma gardens, the vegetables were too contaminated for consumption,” reports Rianne Teule, who is leading our food testing team. “The owner of one garden with contaminated spinach told us that she had received no information from authorities on the radiation risks to her crops, despite reports that government tests on plants in Minamisoma have been underway since March 18.”

The government has been publishing raw data from its own field monitoring. However, its assessment is far from comprehensive. Measurements taken by our radiation team in several parts of Minamisoma city show levels of up to 4.5 microSievert per hour, as opposed to the relatively low levels of 0.7 microSievert per hour recorded at the only official monitoring point in Minamisoma City.

While the Japanese government’s data might not be incorrect, it doesn’t actually give the public the full picture, nor does it adequately protect the health of people in Minamisoma. The people in Minamisoma have been advised to stay indoors or told they can leave on a voluntary basis. However, our measurements, which were taken between government monitoring points, show levels of contamination that indicate a risk to health and safety.

Our field monitoring team met with the Mayor of Minamisoma, Katsunobu Sakurai. He expressed his frustration, citing a lack of reliable information or clear advice from TEPCO and the authorities regarding risks this crisis poses to his community.

“TEPCO has been irresponsible. This was clearly demonstrated when it took 11 days for it to speak to us after the accident. The government has also not supplied us with any kind of report that we can understand,” said Sakurai. “We are asking the government to not only supply enough information about what has happened, but also that it guarantee that it will respond responsibly to possible future risks.”