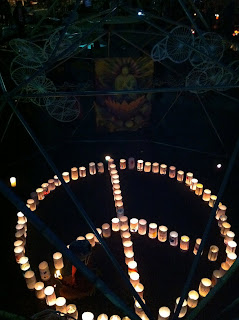 Spring Love Harukaze, a much-loved outdoor event in Tokyo’s Yoyogi Park, turned three-years-old this past weekend. While again featuring some of Tokyo’s top musicians and DJ talents, as well as the blooming sakura (cherry trees), the weekend’s event was considerably more muted in tone compared to the past two years due to the recent Eastern Japan Great Earthquake.

One of the major aims of Spring Love Harukaze 2011 was to raise money for survivors of the devastating earthquake and tsunami. Collection boxes placed around the event grounds brought in a total of just under 226,000 yen (around $2650 USD), which will be distributed to NGOs involved in on-the-ground disaster relief.

Throughout the day, festival-goers decorated small posters with drawings and messages that were displayed during a candlelight ceremony held at sundown on Saturday to mourn victims who lost their lives in the tragedy. Gospel singer (and event chairperson) Yuka Kamebuchi and her ensemble VOJA (Voices of Japan) also sang a moving requiem for the victims, encouraging audience members to sing along to classics including Amazing Grace and You’ll Never Walk Alone.

In order to address worries regarding the ongoing crisis at the Fukushima nuclear power plant, several speakers were also invited to participate in panel discussions regarding issues of nuclear power and radiation exposure. Filmmaker Hitomi Kamanaka, whose trilogy of documentaries to date (Hibakusha: At the End of the World, Rokkasho-mura Rhapsody, and From Ashes to Honey) all address these issues from various perspectives, gave an impassioned talk whereby she accused TEPCO (Tokyo Electric Power Company) and Japanese government officials of deliberately covering up information regarding the accident.

“The industry has long been releasing propaganda saying that nuclear power is safe, and now, following the accident, they have continued with the same lies by declaring that the radiation being released is also nothing to worry about,” she said. “People prefer to believe the propaganda because it’s easier, but unless they face reality, they won’t be able to protect themselves.

“Here in Japan, we have been led to believe that the matter of electricity simply involves flipping on a switch, and people do not think about where it comes from,” she explained. My latest film takes up the issue of the radiation emitted from nuclear power plants on a regular basis—as well as during accidents like the one we are now experiencing—which is something that people here have not been educated about whatsoever.”

Kamanaka’s latest documentary, From Ashes to Honey, takes an in-depth look at the decades-long struggle on Iwaishima island to stop construction of the proposed Kaminoseki nuclear power plant along Japan’s gorgeous Seto Island Sea coast. “Although the Chugoku Electric Power Company promised to stop construction following the accident at the Fukushima nuclear power plant, they didn’t even wait a full day before resuming dynamite explosions at the plant site,” she lamented.

She went on to mention that nuclear radiation released into the ocean is not safe as we are led to believe by industry officials, since it makes its way back up the food chain—a particularly disturbing fact in light of today’s news regarding TEPCO’s dumping 10,000 tons of radioactive water into the Pacific Ocean. The full discussion (in Japanese) may be watched via the Spring Love Harukaze UStream channel (click here for part one and here for part two). An excellent interview with the filmmaker following the recent disaster, where she expresses the complex feelings of sadness of anger shared by many in Japan's longstanding anti-nuclear movement who have long been predicting that a disaster similar to the Fukushima one would occur, may be read here.

Adding a more spiritual element to the event, Hawaiian hula master (and former rock star) Sandii—an artist with a stunning stage presence who appeared with her band and her hula dancers as the final act at last year’s Spring Love Harukaze event—appeared onstage for a brief and yet powerful performance.

“There is a reason why each one of us was here in Japan when this tragedy occurred, and it is now up to each one of us who has survived to learn the lessons of our soul while thinking deeply about what is really important,” she said. “Our thinking truly does create the future, and so it is extremely important that we cultivate positive thoughts.” She went on to describe the existence of an energy source in the universe from which we can draw inspiration and healing, before singing a gorgeous chant which she explained connected this universal energy together with that of the earth. 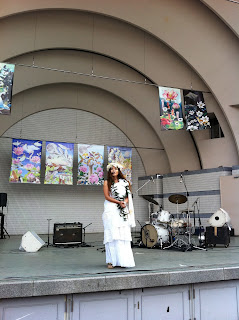 The theme of positivity was one that was echoed by the 100% Love and Peace Parade, an event originating in France that took place on Sunday morning in conjunction with Spring Love Harukaze. Dressed in colorful costumes and exuding lively energy, the parade-goers finished their route through the streets of Harajuku and Shibuya to end up in Yoyogi park stage, dancing first on the main stage and then moving through the event grounds in order to collect more donations for disaster relief. 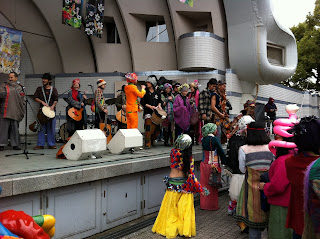 The event finished with words from organizers, as well as the following powerful messages from support that were received from overseas:


My heart has been broken over and over by the recent devastation in northern Japan. But it's also been busted wide open by the *grace* and collective generosity you modeled to the world. Many of us in the US have been deeply humbled, inspired and our hearts made tender because of this. And yes, this is why Japan will rise again - cleaner (energy), stronger, wiser and brighter than ever before! Japan, we are holding the light for you from this shore to yours.

Aho Mitakuye Oyasin (Lakota translation "to all my relations"),

To the People of Japan,

I am writing to you from San Francisco, California. You are far away but you are very close. You are my relations, my family of humanity. The air you breathe becomes the air I breathe; the waters of your oceans ebb and flow on the shores of our beaches. You are not alone. This time for all of humanity and our planet is a huge time of transformation. I feel sorrow for your loss and suffering, and gratitude for all you are giving as our Mother Earth speaks from her heart. We are all in this together; let us bring healing to our planet and the human race.

We are over here sending you love, blessings, and healing. Saturday April 16th we will be playing taiko in an amazing benefit concert for Japan, May 5th again a different benefit for Japan...they are happening all over. We send you that heartbeat. One heart. Let us come together! Stay strong in Spirit, my friends.

Love and Blessings, All My Relations,

Our deepest condolences to all people in Japan affected by the disaster. Berlin Soundstrike is an initiative of international artists against racism, wars and environmental destruction that was formed in 2010 in the USA by the rock band Rage Against the Machine, and is backed by civil rights organizations and individuals. We would like to express our solidarity with the people in Japan.

As human beings we sometimes have to endure the most terrible of natural disasters--but we must never tolerate the most inhumane technology ever developed and forced upon us. We need to realize the existence of an extremely powerful international military industrial complex, which is directly responsible for the proliferation of nuclear power around the globe, as well as nuclear weapons and the ongoing wars in which even cancer-causing depleted uranium munitions are being used.

This all is posing a terrible and imminent threat to the planet and to humankind. After Hiroshima and Nagasaki the majority of the population in both Japan and Germany were strongly against any nuclear arms. But against our will and our relentless protests, many nuclear arms are now stationed in both countries and many nuclear power plants have been built.

At this important crossroads in history, we as members of the international art community need to all stand in solidarity and raise our voices to demand fundamental change and an immediate end to this nuclear madness. In solidarity we stand with Japan! 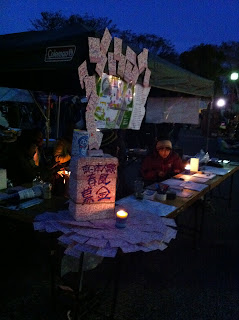 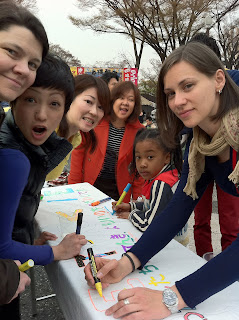 Watch this site for more coverage on the nuclear crisis — and the response of citizen activists — as it continues to unfold.