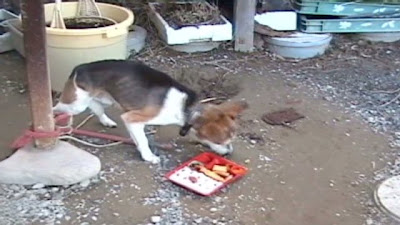 
The photos of tethered and starving dogs in Fukushima are reminiscent of images from Hurricane Katrina aftermath when the U.S. and Lousiana governments ignored the welfare of animals that hurricane evacuees were forced to abandon.

Now that the Kan administration has made the Fukushima exclusion zone official, what about the animals nuclear evacuees had to leave behind? They couldn't bring their 600,000 domesticated animals to shelters. Most have starved to death.

Pet rescuers including Isabella Gallaon-Aoki of Japan Earthquake Animal Rescue and Support had been independently going into the exclusion zone to save dogs and cats. Animal owners want the government to euthanize those than remain rather than let them starve to death; none want to leave them behind to suffer:


A man, 73, who looked after 20 cattle in Tomiokamachi, said he often left his evacuation center to go and feed his cows. "I know each of these cows right down to their facial details and individual characteristics. I don't want to see them suffer," he said.

Ken White at the San Francisco Chronicle shares a letter from a reader:


My name is Mikiko Kuroda who live in San Mateo,California. I really want to act about rescueing animal in Fukushima, in Japan. I am a Japanese and I really want to inform many people in U.S how terrible to animals in Fukushima.(around nuclear plant ) Individual volunteers groups have tried to rescue dogs, cats, horses, cows and more. However, unfortunately they try to survive by eating each other or they die of starvation.

I saw a lot of horrible pictures. And also I have contacted volunteers. Many people in Japan have appealed to Japanese government, but Japan is backward country for animals so the government is no reaction.

Please inform to people in U.S and write e-mail from U.S about rescuing Fukushima animals to Japanese government. This is e-mail address: https://www.kantei.go.jp/foreign/forms/comment_ssl.html

Thank you very much. Mikiko Kuroda


Let me add only one P.S. to this message, and it's one that won't give any easy answers or comfort. We've all seen many requests for funds from national and international organizations claiming to be helping the animals in Japan and asking for your financial support. My advice: be cautious; try as best you can to really determine if the support is effective. Although charlatans do certainly exist in the world of charities, the larger concern here is out-of-country efforts to help which fall short because of no in-country connections. We see this every time there is an international disaster, and even organizations with international sounding names may not be an effective path for getting your dollars where you want them to go. Kuroda's request above is, hopefully, a way to help motivate Japan's government to remain mindful of the non-human victims, and I think that may be especially valuable right now.

Posted by TenThousandThings at 8:01 AM
Email ThisBlogThis!Share to TwitterShare to FacebookShare to Pinterest
Labels: 3/11, animals, compassion, Fukushima, Japan