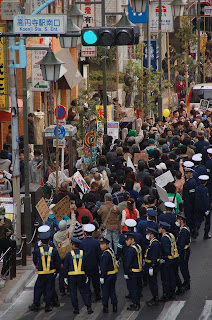 Residents from Tokyo and nearby prefectures poured into the streets on Sunday for the April 10th 'Stop Nuclear Power Plants! Global Action Day', issuing impassioned calls for the Japanese government to stop its reliance on nuclear power.

Two separate events were held in Tokyo on Sunday, with organizers estimating a total of 17,500 people in attendance—more than twice the numbers who attended a No Nukes Festa in 2009. While NHK reported that only 2000 attended, some organizers estimated the total figure at something closer to 20,000.

The first event was held in Tokyo’s Shiba Park, where 2,500 people showed up to call on government and electric power company officials to immediately stop the Hamaoka nuclear power reactors. The plant sits atop the junction of two tectonic plates in the prefecture of Shizuoka, where—in addition to presently ongoing aftershocks from last month's quake—a large earthquake is said to be overdue. A petition to stop the plant is now circulating widely throughout Japan, and supporters from overseas are urged to add their voices. More information about the plant, as well as the petition itself—which will be submitted to the Japanese government, electric power companies, local authorities in Japan and related companies—may be found here at the Stop! Hamaoka Nuclear power plant website.

Meanwhile, some 15,000 attendees—mostly young people in their 20's and 30's who learned about the event online—added fresh energy to Japan’s often traditionally somber demonstrations at a colorful parade and live music gathering in the artsy neighborhood of Koenji in western Tokyo. Parade-goers carried signs with all manner of creative self-expression regarding the tragedy, and many dressed in costumes or decorated their face masks with designs and slogans as the event pulsated with energy and emotion from the early afternoon on into the night. 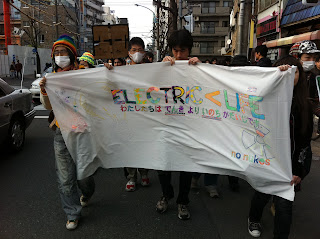 Banner reading “We Prioritize Life Over Electricity”, lovingly handcrafted by Crystal Uchino, author of “Rise Like Tsunamis After the Earthquakes”

The group I marched with chanted slogans that included the following:

30 year-old Japanese-Brazilian Sheila Yamamoto de Souza, a Tokyo resident who took part in the parade, said, “When I heard others starting to chant ‘Give us back our lives,' it really hit me hard. Even in Tokyo, our daily lives have been completely changed as we deal with fears of radiation, and I fear things will never go back to the way they were before. And we have it easy compared to others. I can’t even begin to imagine how the people who have been affected by the earthquake and tsunami in Tohoku, as well as those living near the nuclear plant in Fukushima, must be feeling right now.”

The demonstration was organized by Hajime Matsumoto, owner of a small recycled goods shop in Koenji called Shiroto no ran (Amateur Revolt), that also serves as an artist and activist collective. He wrote on his blog the day after the event: “The great thing about the event was it proved that anyone can organize something similar. I am a shop owner, and although some politicians did end up coming, I didn’t put together the event through any type of organization or structure. Truly, anyone can do this.”

Many participants had never attended any kind of demonstration before, but were inspired by fears brought on by the ongoing nuclear crisis in Fukushima. A young couple from Chiba prefecture marching near me in Koenji among first-time attendees told me they were unsure of what to expect at the event—but felt they had to show up to voice their concerns about the dangers of nuclear power. 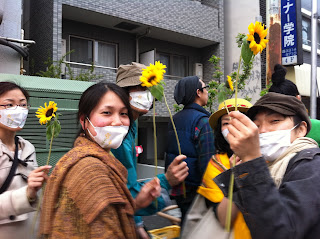 Top: Demonstrators carrying sunflowers with nanohana (field mustard) designs sewn on their masks—both plants are said to mitigate the effects of radiation 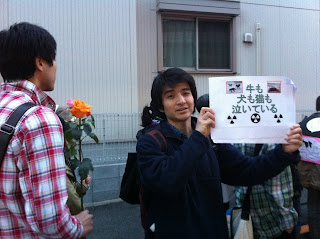 Right: “The cows, dogs and cats are all crying too”


Also spearheading the event were members of the Human Recovery Project, whose website describes their network as follows:

The Human Recovery Project /DIY music network "nobody for everybody" outreach is a loose group of DIY punk band people, rising up in support for victims of the earthquake/tsunami/nuclear power plant catastrophe in north-east Japan. We are based in Tokyo and work in solidarity with our nation-wide/worldwide network of DIY musicians and have already started our "gigs" to the disaster areas with band-vans full of supplies for the victims. Donations welcome!

A local musician involved with the event tweeted afterward, “The mass media in Japan is clearly afraid that the anti-nuclear wave created in Koenji today would turn into a tsunami that would reach every corner of the country, and so they just ignored us. This is no different than the fear we have seen recently on the part of dictator-led governments regarding the small struggles for freedom in Middle Eastern countries spreading elsewhere like wildfire.” 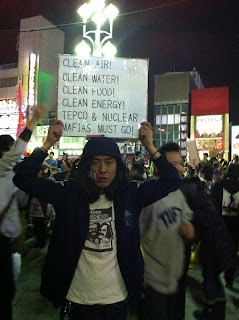 "TEPCO and nuclear mafias must go" 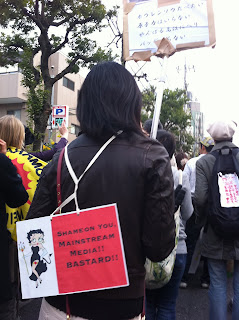 Watch the website of the April 10th 'Stop Nuclear Power Plants! Global Action Day' for updates on solidarity actions that took place in countries around the world including Canada, France, Germany, Korea, Mexico, the United Kingdom and the United States, as well as cities throughout Japan.

Your assistance in spreading the word regarding the "Stop Hamaoka!" petition will also be greatly appreciated. 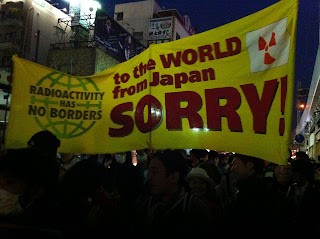